In what I really hope will become an ongoing feature, here’s our first ever artist recipe. It comes courtesy of Samamidon! Check it out:

– Offer the chicken wings of a beaten yellow gold if it doesn’t crow the next day. If it does crow, kill it.
– Cut the chicken into small, bitesize pieces.
– Marinate it in soy sauce.
– Stir fry it with:
some broccoli, some onion, some green pepper, some garlic, some bok choy.
– Serve over white rice

Says Sam: “This will be a falsehearted blow to the ancient american folk tradition, which would mock such hippie fare in favor of KFC. Simultaneously, it is a touching homage to the hippie folk revival of the ’60s and ’70s. In fact, I learned this recipe from my mother.”

Sam in the kitchen: 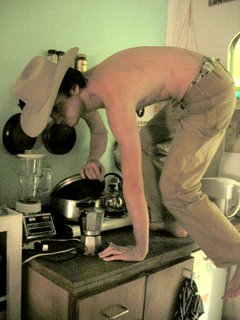 Samamidon’s album But This Chicken Proved Falsehearted is out February 20th, 2007